This was a simple project that started off as a milling job and ended up printed in 3D after modelling in Fusion 360.

The Record Imp vice was a nicely designed small vice for fastening to the bench edge when doing small jobs.  They regularly appear on Ebay in various states of abuse.  Usually the jaws are shot and the paintwork non existent.

I have owned one from new since the 70s and decided I would like a second one for the workshop.   A bid was successfully placed and my new addition duly arrived.

First job was to completely strip it down.  The jaws were removed and the two parts of the vice split.   A serious wire brush session cleaned off the accumulated detritus and this was followed by a coat of red Hammerite.

So far so good.

I had seen an idea for interchangeable vice jaws on a metalworking forum and I had modified my Record 34 to take these.  This concept worked really well on the large size vice so I decided to do the same to the Imp. 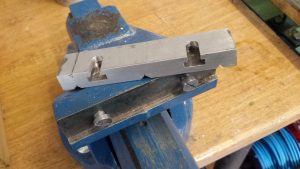 The first job was to replace the screws with disc headed equivalents.  The thread is 24g x 3/16″ (BSW) and four of these were obtained with hex heads which were turned down circular to have a 0.3″ diameter head with 0.095″ thickness.

The metal jaws were milled from aluminium stock.   The actions were as follows : –

I apologise now that I flip dimensions between Imperial and Metric … it is whatever works on the particular aspect of a job.

Fit a 4.5mm cutter in the mill, zero the Z DRO with the tip of the cutter on the top surface of the jaw blank.  Start the mill and drop the cutter 5mm from the zero position.

Replace the tool with a 8mm x 2.5mm Woodruff and bring the cutter bottom surface down onto the stock top surface.  Zero the Z DRO,

Drop the cutter 5mm and cut to half depth across the blank.

Repeat four times in total using the DRO to give you accurate inter slot spacing. 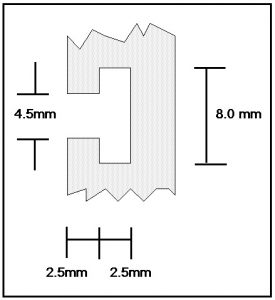 The jaws are fitted in place as a push fit over the modified screw heads.  The screws will need setting for a nice interference fit and then have Loctite added.

Various styles of jaws have been made from aluminium with grooves and V shapes both horizontally and vertically to hold various cross sections.  These swap out very easily.

The along came my Sindoh 3D printer ….. I modelled the jaw in Fusion 360 and 30 minutes later I had a plastic soft jaw in PLA.  This is more than hard enough for most light jobs and if damaged a new one can be printed.

The Fusion design was straightforward with the only tricky bit being the need for a construction plane.  It was done in Imperial dimensions … here is the Fusion STEP mini_jaws v4 file for those interested.