Hands up all those owners of a Tormach PCNC440 who regularly skin their hands, mostly their thumb knuckle, on the corners of the X axis stainless front skirt ?

I have tried to de-burr both corners but to no avail.  It is just lethal to get anywhere near them when rummaging for a dropped part in the swarf (chips) or cleaning out the pan (do people do that or is it just me ?).

After a recent blood letting I decided enough was enough and fitted some electrical endless grommet around both corners.   You have to nick out a 90 notch to allow the grommet to follow the curve but that aside job done.  Hopefully less expletives in the workshop from now on but there again there will always be broken tools and Haimer tips to contend with.

I have had issues when opening Fusion 360 files downloaded from third party fellow users.   I never really got to the bottom of this.   Sometimes they would send me an assembly file and I could open the separate items in the structure but not the overall structure itself.

Things then got worse after a visit to France when I created some straight single item models on the machine out there.  On return to the UK I could not open these files getting a message “Try again when update completes”.   What updates ??  Both the Fusion install in UK and France were running the same version of Fusion so what was the problem ?

I happened upon a thread in the Fusion forum that suggested uninstalling Fusion and re-loading from scratch.   This solved the problem.   The files all now open on all machines.

The desktop computer in France was running on Win7 and Fusion 360 needs Win10 or above.   I brought the machine back with us to the UK and decided to upgrade it to Win10.  I’m not yet prepared to step up to Win11.

As part of the upgrade I took out all the existing drives and fitted a 500GB SSD.  I loaded Win10 which went to plan and used the same email address and PIN entries for the user ID as I use on my UK machines.

Win10 came up with the usual generic blue opening screen and I then sat and began to plan what programs I needed to load for use in France.  After about 15 minutes the blue Microsoft desktop screen disappeared and was replaced with the same desktop image that I use on my UK screens.

So tell me how does the new SSD and Microsoft know that this is my go to image for a desktop ?  It can only be registered in the Microsoft cloud storage against my account details.   Which is slightly worrying.

As a regular reader of my blog you may recollect my frustrations last year trying to get reconnected to the internet in our house in France.   This followed failures by Orange and Free to deliver on promises.

We called in at a SFR boutique on Wednesday afternoon and somewhat apprehensively signed up with them on a new contract.

On Friday evening we were told our line had been activated and that our router would be ready for collection on Saturday morning.   By midday on Saturday we were back on line.  Our previous router delivered around 9MB/s download and the new router is peaking around 15MB/s across the same infrastructure.  Full connectivity is now restored to all our devices in France and back into the UK.

To say we are pleased is an understatement.

Having mentioned the BK3 fence in the Quorn bracket post I realised that I had not posted the details of my fence design for the BK3.  The fence and the two sets of bearing based guides make the BK3 a very accurate and dramatically more useful tool for the workshop.

The fence as supplied with the BK3 was tending towards a chocolate fireguard in its usefulness.   Here is a Fusion 360 pictorial of my design together with a dimensioned drawing.  Both can be downloaded by clicking on the associated PDF file link.

Here is the link to the  Fence Assembly Drawing v4 which has both these views in better detail. 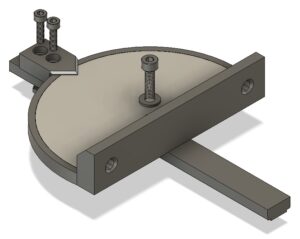 This is a further addition to the BK3 in the form of an angular setting fence.  This uses an inset protractor scale liberated from one of the readily available workshop protractors as shown below.   These are roughly 92mm diameter. 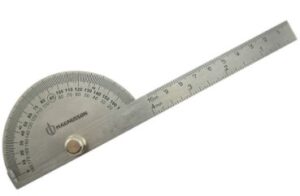 The body is made from three separately printed 3D parts, the sliding bar, the protractor holder and the pointer block.

The sliding bar has been tweaked in dimensions to snuggly fit the slot in the BK3 table.  It has printed nut retaining cavities on the lower surface.   For this reason it should be printed upside down.  Likewise the pointer block has two locating ribs on the lower surface and debatably should also be printed upside down.  This does distort the pointer a little and so might need a clean up post printing.  Customise all the retaining screw lengths to ensure they do not protrude below the lower surface of the bar.   The rotational locking screw could be made a bit more elegant by making a knurled knob item.

The three STEP files and the Fusion 360 file are in this ZIP file.