I bought one of the Wildhorse Innovations Passive Probes some time ago and it gets used occasionally (usually when I have dispatched another Haimer tip to happier hunting grounds).

The Wildhorse design is nice and simple and it can be bought with a ‘Tormach Option’ which is a cable with a ready fitted 5 pin DIN that is pre-wired to plug straight into the Tormach 440 accessories socket.   I have to say it did not talk to the Tormach PathPilot interface immediately.  I had to snipped the pull up resistor inside the unit to solve this.  When in use on the Tormach you have to designate the probe as Tool 99 in the tool table so as to be able to utilise the PathPilot probing routines (which are very good).

So where is all this going ?  Well it is a A to B to C progression …

I dusted the probe off to use the other day and as I had not used it for some time, I did a centring calibration of the probe ball point while mounted  in the Tormach spindle.   This is a real pain to do as the three centralising adjustment screws are on the bottom face of the body.  As a result you can’t see what you are doing and there is a danger of knocking your dial gauge in the process and having to start again.

This got me thinking about whether I could do this adjustment off line in the lathe.  This way the adjustment screws on the bottom face are readily accessible.   This seemed like a good idea except the umbilical cable is permanently wired into the unit so it needed to be protected from a disastrous wrap round the chuck.  Initially I wrapped the cable around the body of the probe and held it there with masking tape but it wasn’t ideal.

Watching the probe spin in the lathe chuck made me also realise that because I had mounted the probe in a Tormach TTS collet this was a waste of a collet. It might also be adding to eccentricity through using such a combination. So you see that one thing leads to another and to another.   A workshop wormhole.

A plan was made.  Fit a connector on the probe body to allow the cable to be disconnected and replace the existing mounting rod with a TTS equivalent.

Finding a suitable connector was a bit more tricky than expected in that there is not a lot of room inside the probe body and a connector that protruded too far would foul the spring loaded mechanics.   My search for a suitable connector combination Iead me to a 2 pin Binder rear mounted socket (Part Number 09 0074 00 02).  Being pedantic it should be a fixed plug as the connecting cable connector (Part Number 99-0071-100-02) would now have two exposed pins carrying a voltage.   The supplier only had the fixed socket version in stock so I conveniently looked the other way on that argument – the cable would rarely be unplugged so not likely to be a problem …

The circular body of the Wildhorse Probe is quite substantial.  When the connector arrived and I was ready to proceed, I took a picture of the existing wiring and then snipped the cable clear.  I enlarged the hole in the body wall to 9mm but then discovered that the mounting thread on the connector was not long enough protrude through the probe body wall far enough to pick up on the retaining nut.   To overcome this I milled a flat area on the shell outer surface.  The two connecting wires where then soldered in place on the fixed connector and then on the mating male connector on the free end of the cable.

The next job was to make the new fixing rod.   I always try to have 19mm silver steel available in my stock box.  This matches the TTS collet outside diameter.  I decided I would make a new mounting rod with the silver steel and I would increase the threaded mounting hole on the probe top to M8 from the 1/4″ size as supplied .

The larger diameter would provide a larger shoulder on the rod to tighten against the probe top. Using M8  would allow the stud mounting hole to still sit within the pocket that retains the pressure spring.   The rod was faced and turned to 8mm for 5mm or so and the M8 thread cut and undercut with a graver.   The other end of the rod was faced and then a 45 degree chamfer turned on it. The finished rod screwed nicely into the top plate and the body now seemed to run solidly square to the central axis.

All operations were now complete and I mounted probe with its cable unplugged in the lather chuck with the new 19mm rod.  I mounted my dial gauge on the lathe bed and set about centralising the probe ball.  It was so much easier in the lathe with no cable to get in the way of things. Transferring the modified probe to the Tormach afterwards gave very similar centralising results.

So a typical workshop wormhole progression from job to job but as ever it was time well spent.

I try to avoid IT issues.

I am not an expert but just have an accumulated veneer of knowledge of what goes on under the hood.  I have also had enough of ‘my printer doesn’t print’ during my working life to not want to expand this limited knowledge.  However when my wife has an IT problem it is in my best interest to try to fix it …

First problem was her Samsung Galaxy Tab A (2016) would log onto the house WiFi network but would not be able to make internet connections or was unreliable.   This did not seem related to whether the connection was to the router direct or via the various extenders we have running.

Logging into a WiFi connection OK but not allowing internet connection smelled like a DNS issue.   The WiFi was running under DHCP so the DNS was being passed out from the router to each device.   I had Google’s DNS servers entered as DNS#1 (8.8.8.8) and DNS#2 (8.8.4.4) on the router.  All other devices were quite happy with this … except the Tab.  My solution was to change all the Tab WiFi settings for each of our nodes as Fixed instead of DHCP and used 208.67.222.222/4.2.2.5 as the new DNS servers.

This seems to have fixed it but you have to ask why was this needed just on this single device ?

Second one was a bit more difficult.

She runs GMail on all portable devices and uses Outlook 2007 on her desktop set up with her GMail accounts.  Yes I know it is a bit dated but it works (usually) so who cares if the GUI isn’t quite so sexy as Office 2040 or whatever the latest version is ?

Logging on yesterday to her desktop it came up with demand to login before allowing access to GMail on Outlook.   It is one of those infuriating dialogue boxes that just keeps on popping up even though you and it knows the answer given is not correct …. except it was correct but was not being accepted. Logging into GMail via Chrome all worked fine so it was something to do with Outlook and Chrome suddenly not being best buddies for some reason.

I did some digging around on the Net and it seems that GMail can for various reasons decide that it is not going to allow access to ‘Less Secure Apps’ and this includes Outlook.   They go to great lengths to tell you it is a potential security risk.

In order to re-enable this you have to log into GMail in Chrome, go into the Security settings in the left hand side pane and find the ‘Allow Less Secure Apps’ section and click this back on.

This fixed the problem and all is now sunshine and joy with domestic peace restored.

Have you ever stopped to consider how much of your life dribbled through your fingers while suffering IT related issues ?

This write up is not for the purists with years of experience but is an explanation of how I thought through how to machine something over size that would not fit into my Tormach PCNC440 milling footprint as a single operation.  Hopefully it might help others to grasp the process.

The challenge began when a local turret clock expert came to me and asked if I could machine a new Hour and Minute Hand for a clock he was working on.   The Hour Hand was around 14” long and the Minute Hand some 18” long.

Here is the Fusion 360 view of the minute Hand. 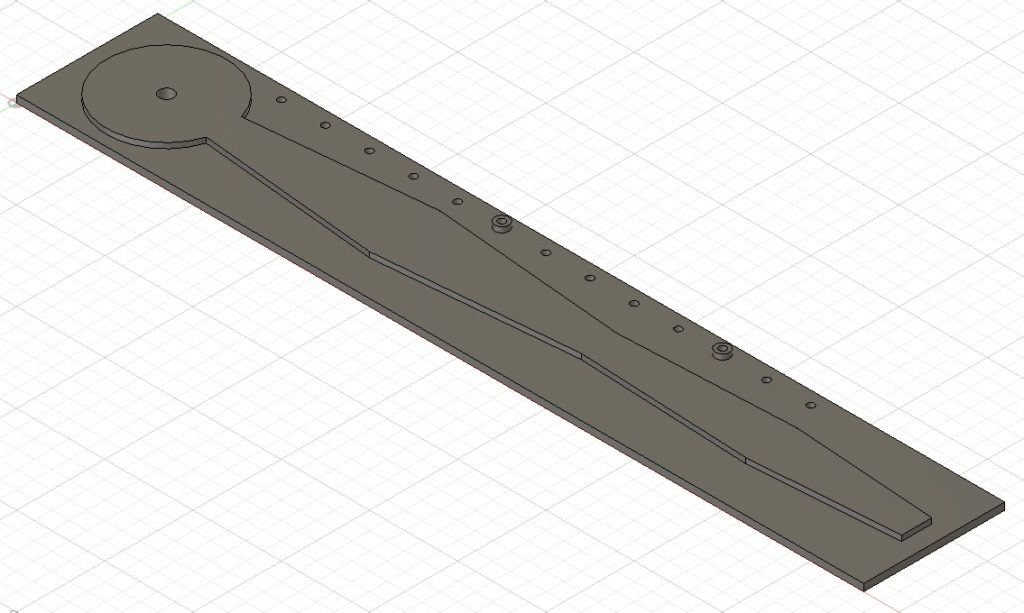 Clearly these lengths were way outside the 440 table X movement (10”) so a plan was needed.  There then followed a lot of staring into the distance at mealtimes and also at bedtime accompanied by vocal “hmmm”s as I tried to mentally visualise what was needed.  This idiosyncrasy is something my wife has come to terms with over the years…..

My conclusion from this mental preparation was that I needed to be able to accurately step the stock across the tooling table and then take two or three bites at the profile machining.

What follows would almost certainly benefit from a video but sadly I am not set up for this.