In the course of looking for possible spares (no chance) I came across a reference to modifications to the BK3 in Model Engineer to improve the blade tracking and speed settings. Here is a link to the articles  burgessbandsaw2.  I am indebted to the members of my local model engineering club who came up trumps with copies of these articles for me. 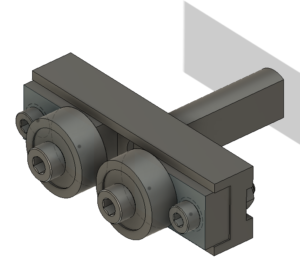 Update :  Since this blog entry I have made other modifications to my BK3 and these are contained in this link BK3 Modifications v2.

I have been avidly watching Clough42 on YouTube.  James comes over as a really nice guy and his presentation of his projects is excellent.

My principle interest is the Electronic Leadscrew modification to lathes.  When installed this removes all the hassle of gearboxes and look up tables to be able to cut both Imperial and Metric screw threads and to set X axis movement feed rates.

The concept is simple but his implementation is second to none.  A rotary encoder is fitted to the spindle to count revolutions of the chuck and a stepper motor (or servo hybrid) controls the rotation of the leadscrew.  The resulting feed speed is derived from look up tables.  The whole installation is controlled by a Texas Instruments LaunchPad C2000 microcontroller development board.

I have documented how I implemented this on my Myford Super 7 Big Bore lathe and the pdf can be downloaded below.   There is also a ZIP file of all the Fusion related models for either CNC or 3D printing.

Since installing the ELS I have incorporated thrust bearings on the leadscrew mounting.   This impacts on the coupling to the stepper motor.