Can’t Remember How to Square Up Material Stock ready for CNC ?

I sometimes have to dig deep in the odds and ends heap of rough bits of materials to use on a project.  This results in having to square up the find so it can be easily programmed into Fusion CAM.   I always have to scratch my head on the process which is well documented by Tom Lipton and This Old Tony among others.  What I needed was something to pin on the wall to remind me.

The result of this frustration is a write up and a graphic which you may find useful.  Here is a screenshot and the link below it provides both this document and the write up in a ZIP file. 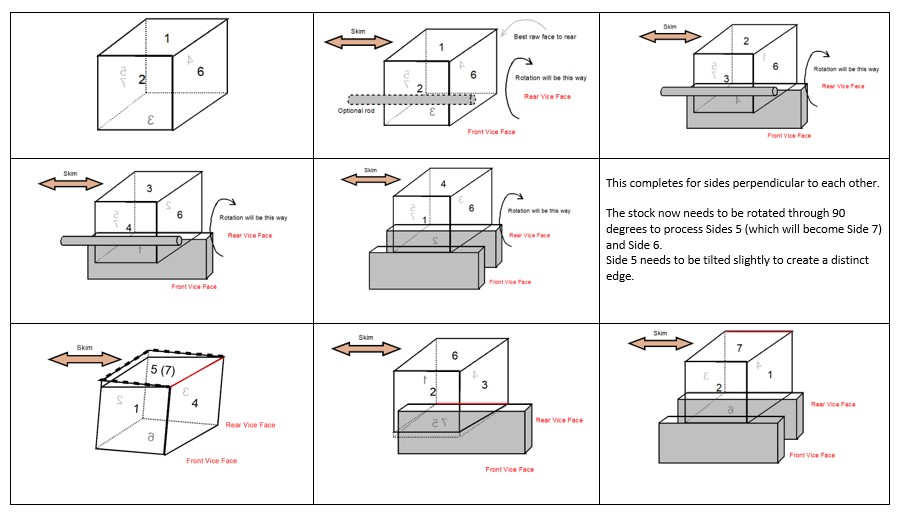 One Job Leads to Another

I had a job for a customer that needed two M18 screws cut on the ends of a  shaft.   I have never cut anything that size before but fortunately I have installed the Clough42 Automatic Leadscrew system fitted to my Myford Super 7 Big Bore lathe.

I tried some trial cuts using the Geo Thomas ‘Red Book’ top slide method but I found there was so much backlash on both the top slide and cross slide that I was struggling for consistency.   In the end I did a hybrid cut ‘nearly there’ using the ALS using plunge cuts and then I finished with a nut die that was happy to start on the part cut thread .   This gave me a clean finish to the thread and I was relieved to get the job done.   Note that my S7 is a ‘metric’ version but the leadscrew is Imperial so screw cutting using the ALS entails keeping the half nut engaged and reversing the drive.

With the job completed my thoughts came round to giving the Super 7 some TLC to try to improve the backlash issues.   I found various discussion threads about fitting thrust bearings to the cross slide and top slide but all referred to EBay thrust bearings that were no longer listed.   After some investigation I found Simply Bearings had two suitable items in stock.   The NTA916-TRA916 is a 9/16″ core diameter bearing and washers suitable for the cross slide and the NTA815-TRA815 is a 1/2″ set for the top slide.  I ordered two of each set.

The attached PDF link below gives details of how I implemented this modification.