I ordered my upgrade to newly released Version 2.x.x of PathPilot for my PCNC440 machine and to be honest the instructions for doing the upgrade were clear and straightforward.   Care is needed as this is a complete clear out of the old version so backups needed to be taken of your GCode files and your Tool Table etc.  Don’t fret however as all this is talked through quite clearly in the downloaded support document (TD10530).

The software loaded well but I then had a couple of problems.

Prior to the upgrade I had a shared folder on my desktop PC that allowed me to blob across the GCode files to the 440 machine without leaving my desk.  After the upgrade this shared folder had disappeared and try as I might, refused to return.   I could ping the Tormach so it was on my network but it was not being seen from a data point of view.

I eventually gave up and posted the problem with Tormach.  They came back quickly with a fix as follows.  This is a simple to do and assumes the ‘green light’ on the internet button (on the status PathPilot page) is lit.

The other issue I had initially is that I could not load DropBox which is a new facility on PathPilot.  As by now I had solved the shared folder issue, this was less of an issue but belt and braces called and finally it loaded OK.

Note that you must reduce the number of folders seen by DropBox on the Tormach or it will flood your memory storage space.  Tormach give instructions on how to do this by listing the folders that need to be ignored.  You cannot cherry pick them from a dropdown list but instead you need to paper list them and then manually enter them.   Also note that any folders you are blocking that have more than a single word name format need to be encapsulated with ” ” when entered in the blocked folder list (unless you have underscored any spaces).   I reduced my DropBox folders ‘seen’ on the Tormach to just one which will contain my GCode files.

DANGER – do not simply delete the DropBox folders that are not of interest in the PathPilot File screen or you will delete them permanently from the DropBox cloud storage.   All your pictures of Auntie Agnes with her Sherry at Christmas will go down the tube ….

I have posted this information on the NYC CNC Forum and John has also created a document in his site Library.

Good luck with the upgrade.  The resulting code isn’t dramatically different but general presentation of graphics and fonts is better and the conversational programming is slightly changed.

Finally I cannot emphasise enough how responsive Tormach Tech Support are if you have an issue.  Without their help I would probably still scratching my head regarding the above.

Disclaimer : –  This post and many others on my website feature references to Tormach and its products.  I have no connection to Tormach Inc financially, commercially or otherwise.  I acknowledge that Tormach®, Tormach Tooling System®, TTS® and PathPilot® are all registered trade marks of Tormach Inc.

But this was a nice exercise in Fusion 360 and Sindoh printing and provided some simple UNO winner prizes.   (Yes we always play at Christmas and it can get very bloody …).

The challenging part was wrapping their names round the body and I am indebted to John at NYC CNC for his video on putting text on a cylinder (Fusion Friday FF104).  Editing the names was not quite so simple – the clue is to turn the body off so you can get at the text which sits in a different plane. 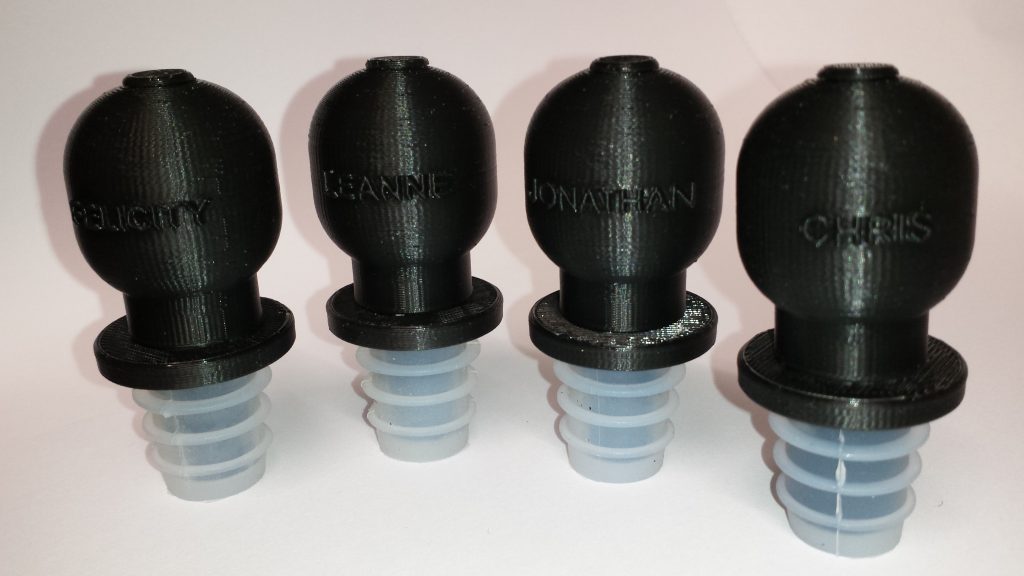 Happy Christmas to anyone who reads my stuff.  More in the New Year and hopefully less Haimer probe breakages.

Readers of my pages will be aware of my involvement with Graham at Delph in helping to further develop his Gearwheel Designer program.  It seems there is a ‘gentleman’, Mr di Claudio,  who appears to have stolen the design and hacked the code.  He appears quite proud of his pirating activity.  It is a sad reflection of the times and the industry.

Knowing as I do the amount of time Graham has been putting in on his code I would recommend anyone interested in his application to do the honourable thing and subscribe the relatively small amount requested.   Without people like Graham having the innovative thought to produce such applications our hobby and indeed commercial interests would be all the poorer.

I registered with Tormach for the free upgrade to the new release 2.x.x of PathPilot.  A memory stick arrived this morning with the new code.   It is fairly complex process but their documentation is quite easy to follow and understand.

All seems to have gone well with the upgrade except I can no longer see the shared drive for dropping files into nor can I get the Dropbox feature to load.  All of which suggests the network connection is not working but I not winning so far.  Gloom but not a disaster.  Fresh eyes another day.

I am now running Version 21 of Gearwheel Designer and it gets better all the time.

I decided to make a ratchet wheel as my next test.  This highlighted the need to think about the process order on the mill.   Below is the design image in Gearwheel Designer. 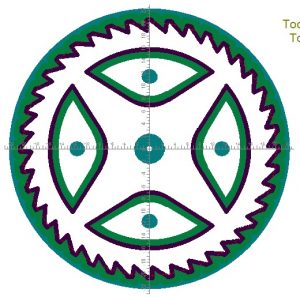 My CNC sequence was as follows : –

The purists will now tell me how it isn’t a proper wheel because the crossing interfaces to the rim have radius rather than a sharp corner.

Well a file will soon fix that …. and I can tell them how I watched another three episodes of House of Cards while this wheel was being cut.