Reduction in Sparkly Bits around the House

When I bought my Tormach PCNC440 in 2016 I included the enclosure kit in my order.   On receipt I thought that fitting the enclosure would dominate the size of the workshop so I never got round to fitting it.   It has sat in its shipping box since then.  I have consequently shared quite a bit of my swarf (chips) with long suffering family.

After a recent (particularly heavy) CNC run I had a serious covering of swarf in the machine tray and because I had no enclosure round the mill, I had quite a lot distributed further afield (i.e. into the house).   Domestic peace was becoming an issue. Time to do something about it.

Out came the enclosure kit, cobwebs dusted off and around three hours later I had the enclosure fitted.  I have to say it looks good and does not overpower the workshop as I thought it would.   My wife is impressed and says it looks a more professional machine and ‘if you had it why didn’t you fit it before now’ ?

The fitting did however create some follow up problems.

My control monitor had up to now been mounted on the side of the 440 on a standard ISO TV mount.  With the enclosure fitted this meant it was ’round the side’ and difficult to get to.   I debated a new long reach ISO but they are expensive.  Plan B was to make something. I rummaged around in my aluminium stock and with the help of Fusion 360 came up with a seriously overengineered extension arm to add to the existing ISO mount. This would allow the monitor to move forward to be in reach at the front of the mill.

This bracket became the first CNC job to run after fitting the enclosure.   I am pleased to say it was the cleanest my workshop floor had ever been after running a job.

Having fitted the new bracket and mounted the monitor, all the cables needed extending.  Fortunately I had had the foresight on my original order to include the extension cable kit.   As a result I only had to extend the power supply lead from the monitor 12V ‘brick’ supply.

The second issue was where to mount my ITTP probe as this had formerly mounted on the side of the 440.   With help of some more Fusion design I modelled a corner mount that picked up on the enclosure fastenings. 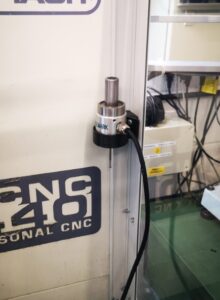 After that first heavy machining run I noticed for the first time the slight smell of the mist coolant when opening the enclosure doors.   Before the enclosure was fitted the smell must have dispersed into the general workshop air.   With the enclosure fitted the air was concentrated inside the mill and I only got the smell when sticking my head inside.  While it had never been a problem (as far as I can tell …) I thought I should do something about it.

Sometime ago I installed a ceiling extract duct in the workshop.   This vents to the outside world via a custom roof tile. Normally the system sits with a flared cowling (made from a cut down flower pot) on the ceiling entry duct.  The system normally acts as a background trickle extract.   The cunning plan in the design was to use various pipe components to provide bayonet style connection pins (Nylon screws) to allow extension trunking to be used.   A bit like a BNC RF connector if this is familiar to you.   This would allow me to use an add-on length of expanding flexi trunking to bring the extract nearer to any heavy fumy activity such as welding or oil bath hardening.

With the use of further scrap odds and ends of aluminium, I mounted a pair of support bars across the top of the new 440 enclosure. These would fix the ducting over the enclosure during heaving CNC sessions.   Not a total solution but certainly one that will reduce the general smell of XtremeCut 250C when I stick my head in the enclosure.

A good day’s activity with all the issues addressed and domestic bliss hopefully restored.

From previous posts you will be aware that I am regarded as ‘Tech Support’ for the local church clock.   The clock is a Cooke of York design dated from 1869. It has been running very well over the past months until a few days ago when ….twang … one strand of the strike wire rope gave way and twirled back up the rope and got wedged in the strike mechanism.   The going train continued to keep time and display on the dials but no bell strikes.  An eerie silence fell over the village.

The errant stand of wire was easily cleared but on further inspection the strike weight rope looked to be in a dangerous condition.  I resolved to replace the rope and while doing this I would also replace the cable on the going train.

The strike chain had jammed with the weight almost at the top so this needed to be gently let down to floor level.

New fibre cored 6 x 19 galvanised wire rope was ordered.  The strike train had 6mm diameter and the going train 5mm and both needed around 30m of cable.   The chosen supplier was RAMS Lifting Gear in London and they agreed to put a 20mm diameter soft loop at one end of each cable.   This would loop over a button on each of the two barrels to anchor the cable.   RAMS delivered the cables very quickly.

Given the social distancing restrictions in place, my normal assistants were not available to help.  Instead I persuaded my wife to climb the bell tower with me to assist with the cable changes.   It is a bit intimidating to ascend up the two ladders for the first time but she overcame her nerves and after a few up and downs became quite at home with the surroundings.

The new cables were unreeled and laid out down the stairs from the tower into the church so they could take their own path and not twist. We had decided to use the existing cables to pull through the new ones.   This meant the soft loops and the associated crimps had to be pulled through each pulley.  This was tight on a couple of them but we managed.

With the cables pulled through and into the clock cabinet we then pulled off the old cable from the drums and ran on the new ones.  Inspecting the old cables revealed that they were not in the best condition and could have been an accident waiting to happen had they snapped clean through.   There is no clock record to indicate when they were last changed.

The clock was soon up and running with its new shiny cables and normality was restored in the village and surrounds.

We received a number of appreciative comments from the villagers for getting the clock up and running again so quickly.  Considering these comments suggested that perhaps the chimes of the clock had taken on a new meaning in COVID lockdown.   Time precision had recalibrated.   Watches and clocks in and around the home had ceased to be the reference in the slow world of lockdown.  Nowhere to go or to be, meant watches lay on bedside tables unworn and unwanted.  Instead people had moved from watching minutes to referencing life by hours.   The village clock now subconsciously marked the passage of time with its hourly chimes.   Everything in between had become a slowed down lifestyle.   When to come or go into the garden or to the shops, when to think about a meal – all now seemed more likely to be triggered by the hourly chimes of the village clock.

Which is probably how life was in 1869 when the clock first broadcast its notes over the village.

Did we perhaps lose something somewhere along the way ?