Quite some time ago I mentioned a really low cost simple microscope that I think John Saunders had recommended from Amazon.   The device has served me well even though it was quite basic. 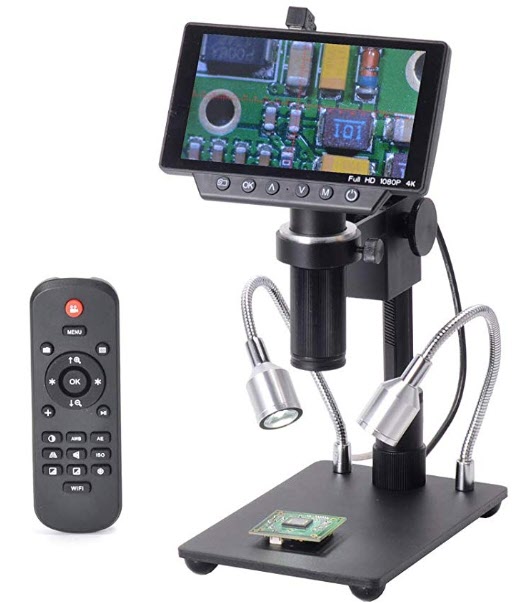 It was a bit more expensive but nowhere near a ‘proper’ professional optical product. Having taken delivery it is very impressive.

It can act as a simple standalone viewer using the built in screen or can be externally connected via HDMI to a monitor or (and this is the impressive bit) it can be connected to a PC via a superb application that has so many bells and whistles it will take me ages to understand all the functions.  The sensor is a 16 Megapixel Sony CMOS 1/2.3″ HD device and video output can be 4K/2k/1080P.  Magnification is up to x300.

So I am well pleased with the investment and  it will certainly earn its keep.

Sorry that things have been quiet but we have been on a 6 week trip to New Zealand.  It was the only country that my wife and I both had heard so much about and both agreed we wanted to see.  So I had to bid farewell to the workshop for longer than I really wanted but you can’t go round to the other side of the world for just the weekend.

We flew Emirates from London to Dubai, Dubai to Melbourne and Melbourne to Wellington with a few hours stop over at each.  If we must fly long haul we like Emirates or Virgin whenever possible and Emirates once again was brilliant.

We had considered doing a golfing holiday through a package deal but it ended up like some sort of crazy route march with tee times booked months in advance.   Not really a holiday.  We chose instead a camper-van do your own thing style tour.   We were both a bit apprehensive about being in close confines for 6 weeks (instead of our normal me in the workshop and my wife playing golf). It took a few days to get into the swing of things and work out a routine but once we were sorted it went well.

We covered over 5,000 kms wandering around North and then South Island.  We usually booked one night’s camp site ahead.  We used the Top10 sites most of the time but also some independent ones.   Some sites were very good, some not so good.  We had one where we felt like cleaning our shoes when we came out of the toilet block …

We covered a significant part of both islands and were blown away by the scenery.   We struck lucky with the weather with the sun following us around on our journey.   We did get to play golf but rather than pay NZD200 for a round we played small town courses for NZD30 tops.   The courses were beautifully manicured, most were deserted with an honesty box for green fees and we met some interesting people.

I didn’t get to see much mechanical tech but there were a few heritage steam railways and museums that I couldn’t resist visiting.

It is a great destination and despite my reservations, the camper-van was a great way to see things and the 6 weeks flew by.   Highlight for both of us was a front seat helicopter flight from Queenstown to Milford Sound via a glacier landing and with blue skies all day.   Not many people see Milford Sound in sunshine.  We were very very lucky.

The workshop awaits and my newly installed heater will ensure a cosy winter activity session.

Great to be back and it will be even better when we have shaken off the jet lag.