I am a great lover of the Raaco 18 section storage boxes for my various sizes and ranges of nut and bolt fasteners.   These boxes are not unduly expensive and are very durable with a sliding locking latch (assuming you don’t forget to slide it place – see below). 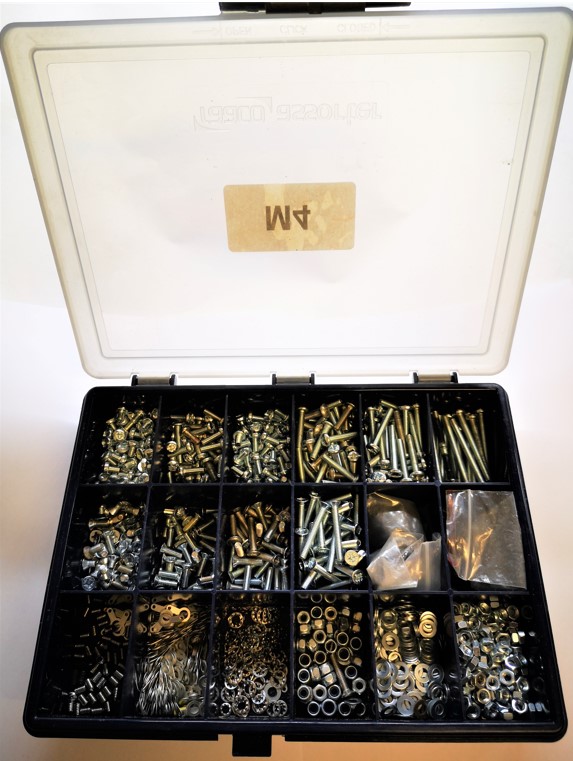 To date these boxes have been stowed stacked one of top of the other on the shelf above my office workbench.   Come the need to get a particular size fastener for a job I can bet on the box I need to access being at the bottom of the stack.   This can get frustrating and can also be risky because if I haven’t fastened the lid properly there is an ever present possibility of a lot of fasteners hitting the floor with some associated colourful expletives.

As you have probably gathered from the previous post, this has been woodwork week or at least MDF week if that counts as real woodworking.  After finishing the storage box for my clock bushing gizzmo I still had MDF to spare. With some judicious juggling in Fusion 360, I came up with a design for a slide in storage rack for my Raaco box collection.   In fact there was enough MDF left over to make two of these.   I did have to buy in some 30mm x 2mm angle though. The design allows access to any fastener box without the need to shuffle the stack to get at the one I needed.  Joy of joys. 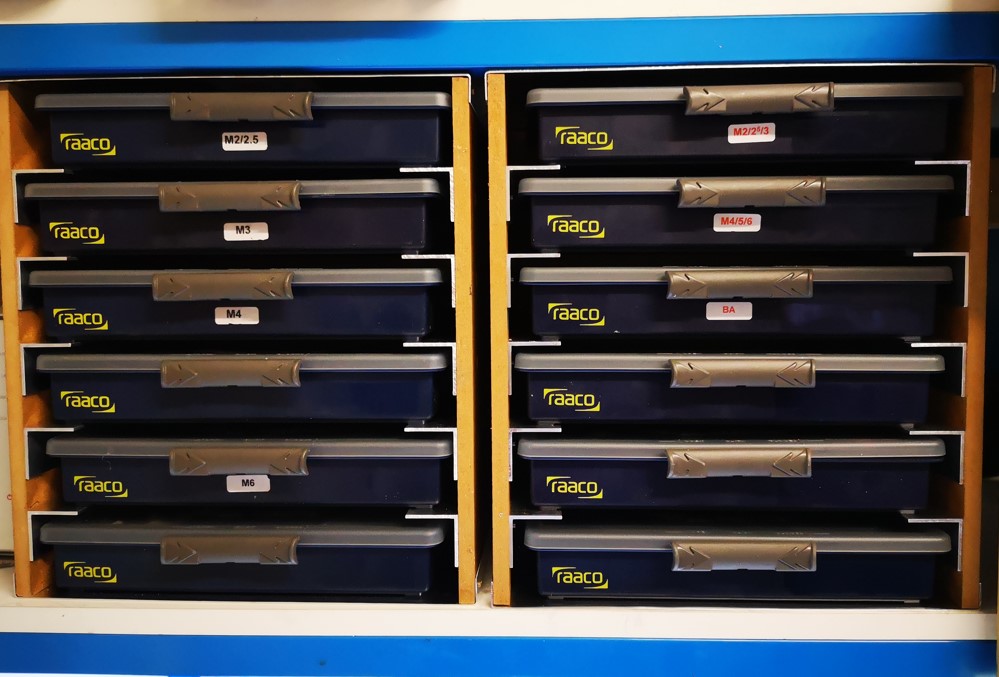 The storage unit is 300mm high and has MDF sides and back board.  I had to revert to a 1mm sheet of  aluminium for the top and bottom surfaces to get the optimum number of boxes to fit between the workshop shelves.   Each storage slot has an aperture of 250mm x 47mm (excluding the aluminium angle) and is 180mm deep.

The added bonus to the design is that the Raaco fastener slide is a very tactile grab handle to draw the wanted box out of the rack.  The feel of the slide also acts as a warning flag that the slide might not be correctly locked in place.

OK so this is nothing radical but worth adding to the armoury.

I am in the process of making a protective box for my clock bushing tool and the various accessories that are used with it.   I had some 9mm MDF board in stock that looked a potential candidate for this.   The only problem with a 9mm board thickness is that this didn’t leave much margin for error using standard 6mm dowels and I did not want to use screws or nails to hold my box together.

The solution I came up with was to use 3mm bamboo barbeque sticks as dowel substitutes. These are incredibly strong in sub 25mm lengths.

I did cheat however and did not try fit them in blind holes but instead drilled the mounting holes through to the outside surface.   It still looks OK and has resulted in a very strong structure.

I have had a few requests for a compendium of all my spreadsheets created over the months and years.   This will be a work in progress as new sheets are created and then added.   Here are the current contents. 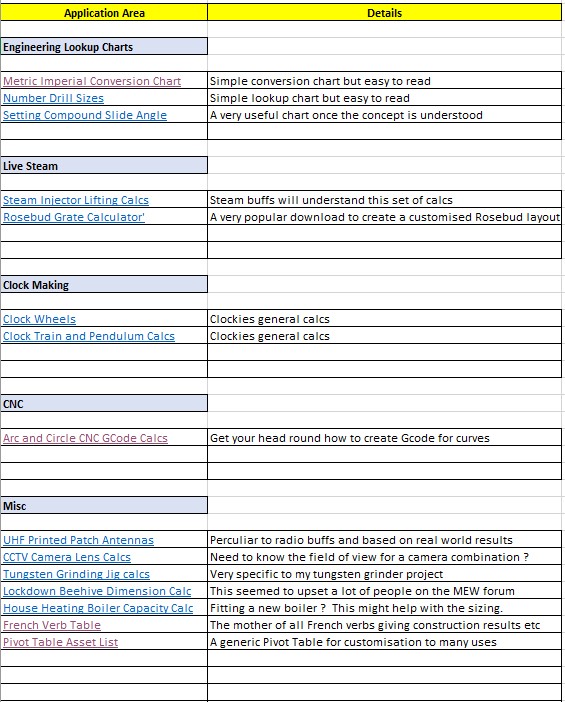 In the course of making miniature taper reamers to bore injector cones I initially struggled to set the compound slide angle sufficiently accurately.  DAG Brown’s book details using geometry to set the angle and once I grasped this concept things improved.  This is shown below and uses the Sine Rule. 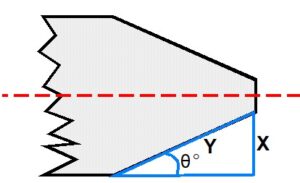 The application method involves using a dial gauge set to zero when touched off on the workpiece. The cross slide readout is also zeroed at this position (this can be on a DRO if fitted or the Vernier scale). The compound is then moved a known distance along the workpiece before measuring the displacement needed on the cross slide to bring the dial gauge back to zero.   Here is a picture.  This is not rocket science and has been detailed on many other sources.

By making the Y distance as large as possible, the resolution of the angular setting will be improved.   The distance for Y is best chosen to sit symmetrically either side of the ‘closed’ position of the compound. By standardising on a fixed Y distance the process can be made more repeatable for day to day use.  Angles can be committed to a lookup table and hence my idea to create a spreadsheet as detailed below.

On my Myford Super 7 I decided that a distance of 50mm for Y gave me a reasonable travel distance (+/- 25mm on the closed position).   This could be accurately measured using the compound Vernier scale dial (my Myford is a metric version).

To speed up the measurement process I scribed a 50mm spaced start and finish mark together with a datum mark on the side of the compound.   The datum mark is on the protractor ring. These ‘scratchings’ are shown below.  (The extra cap head screw and pin are the Geo Thomas ‘Red Book’ compound lock mods). 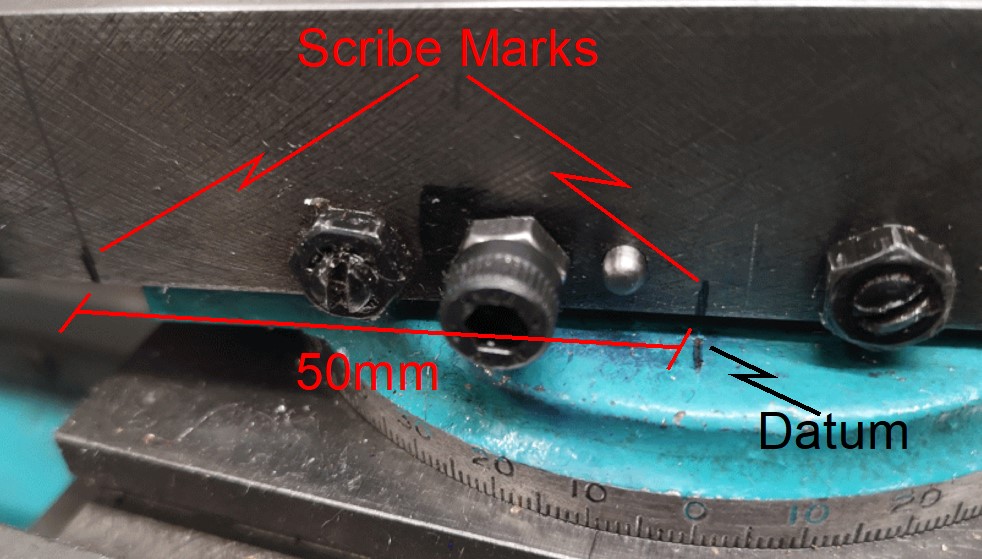 To mount the dial gauge I used my 3D printed gauge holder in the tool post.

With all the setup tasks decided, the spreadsheet was created.  I chose to have 0.5 degree steps through to 69.5 degrees (it could be extended beyond this).  I also added two standalone look up  calculations. One to allow a single angle to be spontaneously calculated and one to back check a measured X distance to find its associated resulting angle.  The latter would allow set up errors to be quantified to allow a knowledgeable ‘tap’ of the compound in the right direction.

The spreadsheet can use any units for Y as the table will automatically reflect this change.  Here is a screenshot of the table based on my chosen value for Y of 50mm. 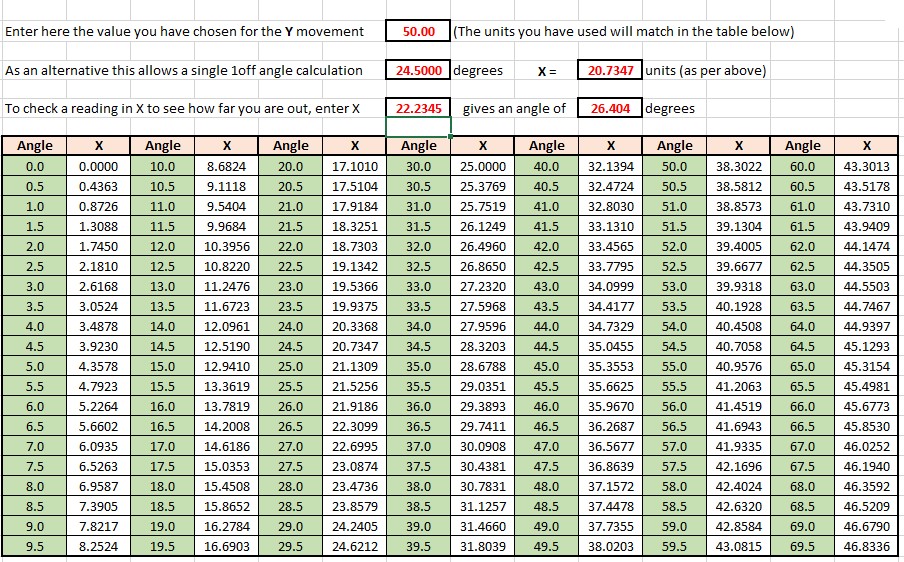 The spreadsheet .XLSX file can be downloaded from this link.

This one is way off beam …. an enquiry for help appeared on the Model Engineering Workshop forum for a simple shopping list when buying groceries etc.

Excel has a facility to create a special version of a spreadsheet called a pivot table.   In short this is a table that contains columns and lines but each column has a header that is automated to allow sorting of the table by that particular column.   Not only does the column sort the full table but you can refine the data to just show and sort lines of interest.   It is easy to use, no macro skills needed just click and sort. I love pivot tables …. well lets be honest I love Excel.  So many possible uses for lines and columns.

The spreadsheet is on my download page and is stored as a ZIP file. 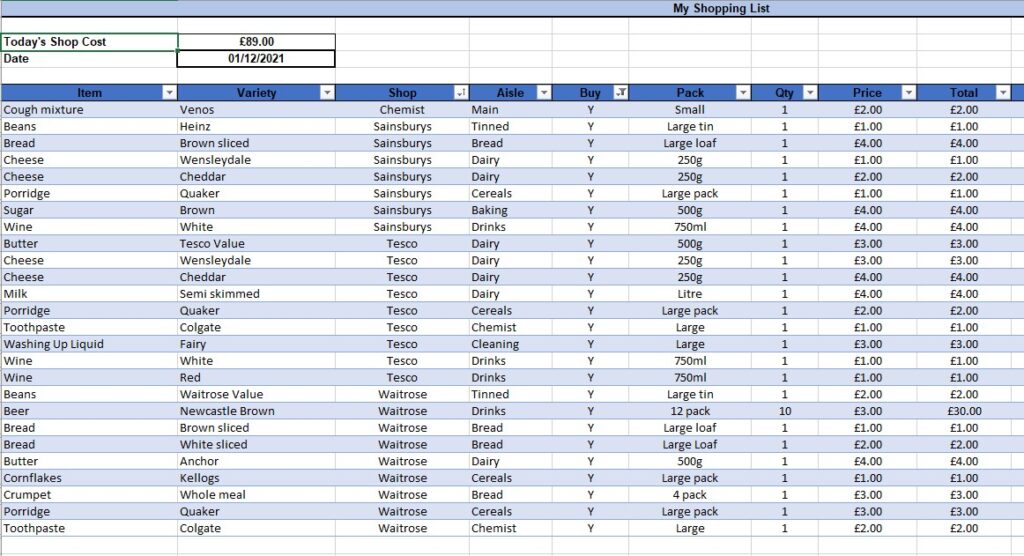 Once you have the ‘Y’ on the items of interest you get a price for the total shop.   You can then click on the Buy column header down arrow and a dialogue box comes up that asks how you want to sort.  By selecting just the Y entries you get a unique list for today’s shop.   Once you have the Ys only, you can then sub sort by store and by aisle or location in the store.  Once you have something that suits your expedition, print the active area by highlighting and using Print Selection and off you go with a prompt of what you should be looking for as you walk round each store.

There are no macros, no complex formula and anyone can use it.

OK it is a bit over the top for shopping but as the years pass we tend to forget what we went to the shops for in the first place.   We also tend not to see the price creep from week to week. Maybe it will help someone ?

More importantly the pivot table could be modified to become a workshop asset register.  Change the headings to Item, Manufacturer, Source, Location, Price Paid (the price you paid or the price you told your wife you paid ?) etc and you begin to look organised.   The grim reaper arrives and your family now have a listing of what you had hidden away, where precisely and at what value. They are now a step ahead and they are less likely to get ripped off by the workshop clearance bandits.   Think about it, it could be time well spent.