The Shumatech DRO350 is a kit based digital readout display for low cost vernier scales and can be bought for either a milling machine or lathe.   Shumatech appears to no longer trade but I managed to buy the full lathe kit including the box from the UK agent.  The US agent is Wild Horse.  See previous post from France.

The product is quite well conceived and has a wide range of functions beyond just a basic readout of X,Y,Z scales.  The kit was simple to put together and I quickly had it working as a lash up on the bench.

The first problem was the fact that all the connections are configured to come out of the back plate of the plastic enclosure.  For my application this was not ideal.   The connectors as supplied with the kit also were not the same as the RJ11 on my scale cables.

I created a ‘pod’ in Fusion 360 that would mount on the end wall of the box and carry all the connections.   This was 3D printed in black to match the enclosure supplied.  Space was tight to fit all the connections into the space and I had to resort to RJ10 style connectors for the scale leads as RJ11 were too large.  I had to extend some of the connecting leads. That aside the ‘pod’ concept worked well. 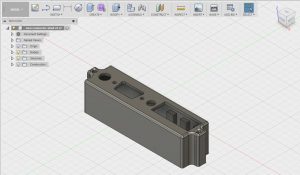 There is significant debate on the internet about the Shumatech design and its apparent instability or flickering of the digits on the display. Opinion seems to be mixed as to where this originates.  The PCB design is not ideal with some very long thin power supply tracking and no ground plane screening.  My two small scales seemed to not suffer this problem but my long scale definitely had a problem.

Once again opinion on the internet is mixed as to how to overcome this.   This ranges from changing the wiring in the readout box for better earthing, leaving the batteries in place in the scales or replacing them with capacitors to add smoothing.

I tried all these to no real positive effect on the long scale.   I even tried inductive decoupling of the connections at the scale terminations.

I took a step back and tried to run the scale on a separate 1.5V bench power supply on long leads and lo and behold the problem still existed suggesting it was a power supply pick up fault and nothing to do with the Shumatech electronics.

I had to hand a small 9V to 1.5V power supply module based on the AMS1117 “3 legged” integrated regulator.   I connected this close to the scale and ran the regulator input from 5V.   The jitter disappeared suggesting it was really about the pick up on the supply to the scale.

I had stock of the AMS1117 chips and SMD caps so I made 3 regulator boards and in Fusion 360 created a small box and lid to contain the regulator module.

The pcbs were made as a first job on the Tormach 440.   I hand coded the G Code to run a dentistry burr in the chuck to profile the pcb tracking.  OK it was a simple job but it gave me some confidence on how to make the mill sing to my tune.

The finished assembly was then connected in line with the scale lead and close to the scale.  For consistency I modified all three scales in this way.

I needed a 5V feed at the display end and to achieve this I cut the display positive lead from the pcb connectors and connected them with a flying lead to the 7805 on board 5V regulator.

On power up the scales all worked well with no obvious jitter and my Myford Super 7 now has a nice readout facility.

For the full story see the following Shumatech DRO350 Experience.