From previous posts you will be aware of my involvement maintaining the local church clock.   Over the past months my colleague and I have been nibbling away at various little problemettes with the movement and things are now looking quite good.   For the past two weeks it has run sweetly and maintained +/-1 second over that period.

Then last night it stopped.

This morning we wandered round to see what the problem might be.  The first thing we do on arrival is look at the front dial to see at what time it had stopped.   This time it had stopped at around 10.35 last night. We climbed the tower and inspected the movement.

There did not seem anything obviously wrong so we decided to swing the pendulum and get it working again. We had arrived at just before 10am and our inspection took us over the hour and the front the dial was showing 10.35.  Because we were now ‘within the hour’ it was acceptable to wind the hands back to the correct time which was now just after 10am.

I pulled out the motion work locking pin and began to move the hands (which were now independent of the movement) in a backwards direction to set the time. Except the hands would not move backwards.   There was resistance.  Something bad had happened to the motion work.

We checked the mechanism to both the front and rear dial but there was nothing obviously wrong but the hands refused to go backwards under light pressure and I did not want to force anything at this stage.

We went outside again and this time checked the front and now also the rear dial and this is what we saw : – 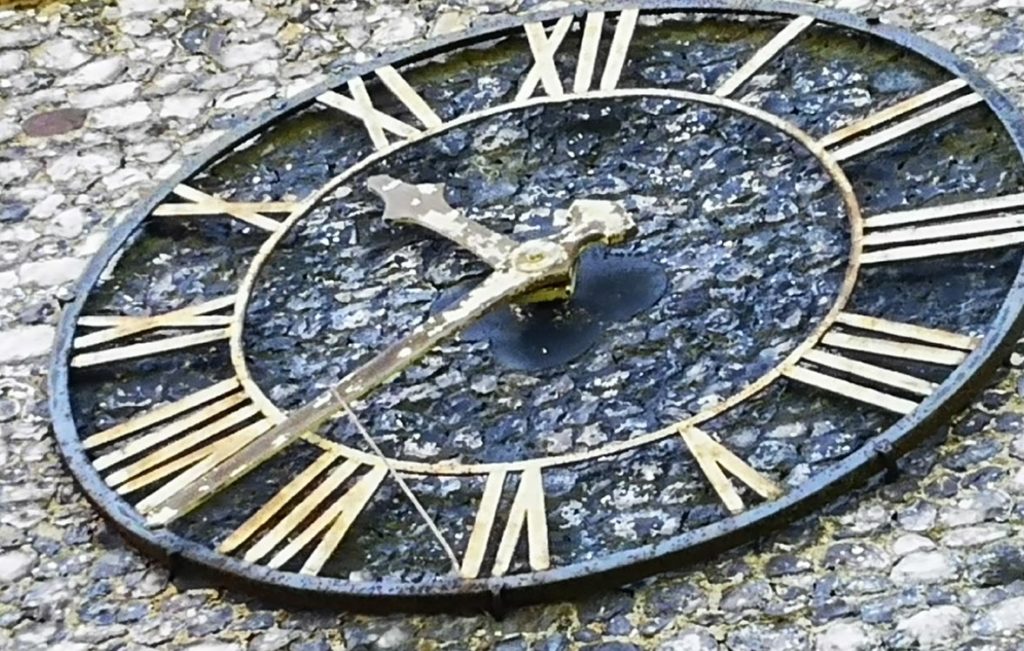 Our feathered friends had built a nest on the belfry window ledge and a stick had fallen from the nest and jammed itself in the dial.   The odds of this happening must be pretty thin.

A careful waggle of the hands back and forth broke the stick free and we then reset the time and hopefully all will now be well.

The interesting observation was that the stick was only brushing the hand in the forward direction but in reverse it was pushing against it.    The forward resistance was still sufficient to reflect back through the motion work into the main mechanism to stop the escapement and therefore the clock.

Another bit of knowledge gained.