Turning a Dribble into a Flow

The right hand side oiler for the Z axis on my 440 has always had a poor oil feed to the slideway.   I had tried to clear all the pipework that is easily accessible but with no improvement.   I was conscious that deeply embedded in the spindle assembly was an oil manifold that fed the left and right slideways and the ball screw.   Could this be the source of the problem and how was I going to get at it without a major strip down of the Z axis spindle assembly ?

Looking down from the top of the spindle assembly I could just see the manifold in a hole in the casting.   If I could get to this I might just be able to work on it without a major strip down.

First of all an apology that I do not have any photographs of what follows as I was so engrossed and so grubby that I left my phone secure and out of the way.  The process will become obvious as you progress and is not overtly difficult.

With all this removed it fully reveals and gives access to the cavity containing the manifold.   It is a short term joy because it is pretty much impossible to undo the right hand side oil feed as this is from the end of the manifold.

Light bulb moment – if I drilled two 6mm holes in the assembly casting opposite the two hex head screws that are holding the manifold in place, I could get a hex driver T bar to remove these screws and free the manifold from the casting wall.   This would allow the manifold to be moved to work on it.

Here is a drawing to help locate the two holes giving the distance from the back and bottom of the casting. (The lower black and blue assembly is my fogbuster mounting). 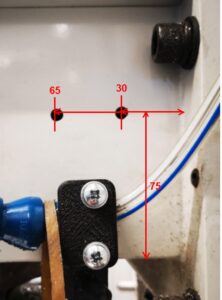 Once the manifold is free to be moved around it is possible to remove the right hand feed pipe and remove the associated length of pipework to clean it.   I found the manifold end of the pipe had not been cleanly cut and was restricting oil flow.

A word of warning – the oil feed to the ball screw is a semi rigid pipe and this terminates in the side of the ball screw.   Do not overstress this length of pipework or there will be tears.

Assembly is the reverse process.   Apologies once again for the lack of supporting pictures.

I can report my right hand side Z axis slideway oil flow is much improved.